Healing Words – How Doctors and Patients Can Better Communicate

As an experienced communicator I continuously analyze messaging, down to what words are best to use when trying to get an idea to connect with an audience. I do this when it comes to policy, campaigns and marketing. I use it to help promote the non-profit organizations with whom I volunteer. But I had not before considered how much impact a few words can have when it comes to your health. 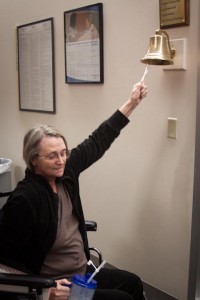 My mum ringing the bell signifying her final treatment at Siteman Cancer Center on December 12, 2011.

My mother recently completed more than seven-weeks of radiation and chemotherapy treatments (APPLAUSE!) at Siteman Cancer Center in St. Louis, Missouri. She chose Siteman for these difficult, but life-saving treatments because of their world-class reputation and, more importantly, how well they communicated with her during her initial consultations.

It was quite impressive. The consultation had no time limit, the doctor, his residents in training and lead nurse coordinator listened intently. They then shared their experiences and even presented a power point describing how the treatment works, visuals and lists of all the possible side effects, and how the long-term recovery process would work. Their words and complete attention, coupled with their reputation and unsurpassed history of delivering this type of care in Missouri made them her choice.

This thorough level of communication continued throughout her specialized treatments, particularly with radiation oncology – that is until she had to be admitted to the hospital.

Unfortunately, she was one of a percentage of patients who encountered complications that forced her to be hospitalized. She had constant nausea, was severely dehydrated and needed to have a stomach feeding tube surgically placed. The normal turn around after the feeding tube is inserted is 48 to 72 hours. However, in her case it took weeks to finally find the right combination of feeding formula and medications to keep the food down and her nausea at bay. While in the hospital,  she was greeted daily with the phrase from her nurse practitioner or attending physician of “Let’s get you home today.”

At first glance, those words don’t seem that bad. In fact, most of us would prefer to be home than in the hospital. But when you aren’t in good shape, and you feel like you’re barely making it by with professional care, going home too soon can be downright scary. It was for my mom and dad. Hearing this phrase day-in and day-out led my parents to possibly believe her in-hospital care providers were more concerned about the bottom line than health. Questioning that led to questioning other aspects of her care.

Ultimately, my father and I spoke bluntly with my mother’s hospital care team and explained how much fear and concern that phrase caused, especially when it was obvious she had not yet been stable for 48 hours. We agreed to not discuss “going home” until she was stable for 48 hours. And when she was, she did go home, and was happy about it.

The lesson here is we all use routine phrases when we communicate. When we great someone it usually includes the questions “how are you?” with the blanket response of “fine.” But how we’re really doing is usually not communicated.

Doctors and hospital staff enter dozens of patients’ rooms every day and greet them with “Let’s get you home today.” Its a phrase they learned and say it believing that everyone would rather be home. But the truth is, when someone is sick enough to be in the hospital, they aren’t anxious to go home until they are truly well enough. So, in the future, hopefully the first thing they greet their patients with will be “How are you feeling today?” It will serve their patients and the relationships they have with them much better. And to me, that makes them healing words.